Coats of Arms and family crests are not uniquely associated with chivalry and knights in armour. Throughout all periods of history symbols have been used to represent affiliation and authority. The Romans made use of the eagle and distinctive markings on their shields to help identify specific legions. Most scholars associate the beginning of medieval heraldry with the Emperor Charlemagne who ruled the Frankish Empire from 768 to 814. There was a rapid expansion of the use of heraldry across Western Europe in the early twelfth century.

As the number of coats of arms increased there was a need to have a system of recording – this became the responsibility of “Heralds”. Initially “Rolls of Arms” were produced which were a collection of coats of arms usually painted, drawn or listed on parchment. Eventually “Ordinary of Arms” were produced which was more of a reference work that listed coats of arms in alphabetical order. This practice of recording a coat of arms or family crest in written, as opposed to pictorial format, is still used today. The control of coats of arms was vested in the High Court of Chivalry during the early 14th century with the college of arms being established by Richard III in 1484. However, by the end of the 15th century the system was very much abused and a number of audits (called visitations) were undertaken during the 16th and 17th centuries.

Throughout the 18th, 19th and 20th centuries family crests and coats of arms have remained popular with some parts of the design growing more complex and ornate. Many people will associate themselves with a coat of arms via their surname. Where no direct male decendancy can be established it is common to use the oldest coat of arms associated with that name. 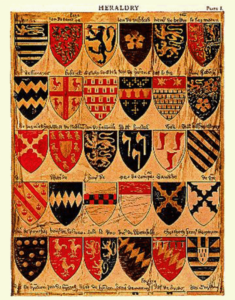 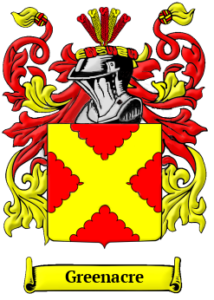 Blazon – There are four main devices (symbols) typically seen in the Savage blazon, they are:

The Lioncel (A small lion, when one of several in a coat of arms), Unicorn, Pheon (a head of an arrow borne as a heraldic charge) and Fleur-de-lis (stylized lily composed of three petals bound together near their bases).

Sable, A deep black, believed to be named from an animal of the marten family know in the middle ages as a Sabellinœ and noted for its very black fur. It may seem a sombre tone, and does sometimes denote grief, it is more commonly said to represent Constancy.

Argent, A metal Silver and is usually shown as very pure white. It is also known more poetically as pearl, moon (or luna).

Azure, A bright, strong blue color. The use of this colour symbolises Loyalty and Truth.

1) (West Bergholt and Copsford, co. Essex, 1611). Chequy or and gu. a lion ramp. erm. a canton az. Crest—Two lions’ gambs erased erm. supporting a pillar gobony or and gu. capital and base of the second.

2) (Baron Abinger). Motto—Suis stat viribus. Chequy or and gu. a lion ramp. erm. on a canton az. a castle triple-towered ar. Crest—A Tuscan column chequy or and gu. supported on either side by a lion’s gamb ermines erased gu. Supporters—Two angels vested ar. tunics az. wings or, in the exterior hand of each a sword in bend ppr. pommel and hilt gold.

5) (Elmley Lovet, co. Worcester, and Highgate, co. Middlesex). Same Arms, a crescent for diff. Crest—Out of a ducal coronet or, a lion’s gamb erect sa. charged with a crescent or.

7) (Clavering-Savage, Elmley Castle, co. Worcester). Same Arms, on a canton az. a fleur-de-lis of the field. Cresl —A unicorn’s head erased per fess ar. and gu. armed and crined or, in the mouth a fleur-de-lis az.

8) (Midsomer Norton, co. Somerset). Ar. on a pile az. six lions ramp. three, two, and one or. Crest—A unicorn’s head couped at the neck per fess wavy az. and sa. three bendlets ar. armed or, in the mouth a sprig of oak fructed ppr.

18) (Ardquin Castle, co. Down, and Lisanoure Castle, co. Antrim; a family coeval with that of Portaferry; Fun. Ent. Ulster’s Office, 1665; presumed by some authorities to to have branched off at a very early period from that ancient house). Motto—Fortis atque fidelis. Same Arms, an annulet az. for diff. Crest—On waves of the sea a mermaid ppr.

21) (Kilcreen, co. Kilkenny; exemplified to Clayton Bayly, Esq., of Kilcreen, on his assuming, by royal licence, 1837, the surname and arms of Savage in lieu of Bayly, in compliance with the will of his uncle, Francis Savage, Esq., of Hollymount, co. Down). Motto—Fortia atque fidelis. Ar. six lioncels ramp, three, two, and one sa. Crest—Out of waves a mermaid all ppr.